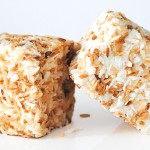 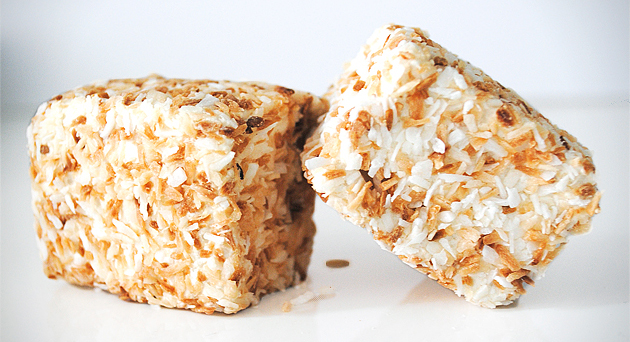 Sprinkle gelatin over 1/2 cup water in bowl of mixer and let soften while you make syrup. Combine sugar, corn syrup, remaining 1/4 cup water, and salt in a 1‐ to 2‐ quart heavy saucepan and heat over low heat, stirring, until sugar has dissolved. Bring to a boil over medium heat. Insert thermometer and boil, without stirring, until it registers 240 degrees. Remove from heat and let stand until bubbles are gone. With mixer at low speed, pour hot syrup into gelatin in a thin stream down side of bowl. Increase speed to high and beat until very thick,about 15 to 20 minutes. Add vanilla and beat for 1 minute more.

Spoon marshmallow mixture over toasted coconut in baking pan and press evenly with dampened fingertips to smooth top (it will be very sticky). Sprinkle top evenly with 1/2 cup toasted coconut. Let stand, uncovered,at room temperature until firm, about 2 hours. I put into the refrigerator for about 15 minutes to help it set and then took it out. Cut into one inch squares and cover the sides with the remaining toasted coconut. Store in an airtight container.